We can announce the following game to be played for the Elite groups.

Please use the Team App to confirm your availability for the relevant games.

The free trial evenings take place from 6-7pm on August 22nd and September 5th at Kettlethorpe High School, Sandal, Wakefield. Players are welcome to book both.

We are pleased to announce that we have increased the number of training sessions during the summer school holidays. Instead of our usual 6 weeks break we are only having a 2 week break. Please see below for further details of when training finishes and restarts.

When we return after this break all the players will move to their age groups for the new season (2016/17). This will mean a change of training time for a couple of the groups (next seasons timetable will be posted on team app next week)

There is no need to change any of your access groups on team app as we will update them which will automatically change yours.

As part of our Summer of Football we have announced the dates of our Summer Holiday courses and we are offering a free course for every player who wishes to book. Full details are here

There is also a Stadium Tour at Manchester City available and trip to the Footgolf Centre at Woodkirk Valley.

The following development games have been confirmed between the Wakefield and Rotherham Development groups.

Information for the games is to be sent out via Team App with chat rooms open for availability checks. 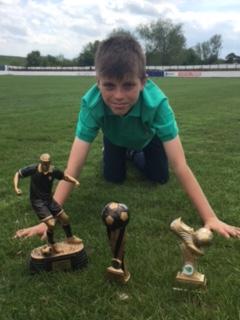 We are delighted for Noah Harding who has been offered a one year contract with Barnsley Academy.

Noah has been with Pro Player Football Academy since July 2014 and after a successful trial period he has been offered a permanent contract at Barnsley. Noah is a player who gives everything in training and games and the contract comes as just rewards for his efforts as well as the ability he possesses. He also plays with Frickley Athletic and alongside Pro Player they have helped with his progression.

‘We are delighted to let you guys know that Noah has just signed a contract for 2016/17 with Barnsley Academy.

Noah was one of the original lads with Pro Player when you first set up in Crofton, Wakefield a few years ago. Thanks to your team of dedicated coaching staff – Dave, John etc. Noah has grown as a player alongside your fabulous academy.

He has thoroughly enjoyed your coaching sessions, organised matches played and holiday clubs and we wouldn’t hesitate to recommend your academy to others.

Thanks for all your time and efforts spent improving him as a player to get him where he is today.’

Noah signing at Barnsley follows on from last months news of Raj Palit signing at Huddersfield. We are very proud of being able to help players in moving on to professional academies. Good luck Noah.

We will not be running a holiday course during the holidays at the end of May. The coaches involved in the running of the holiday course are taking further coaching qualifications during this week. We will be announcing our plans for the summer holidays in the coming weeks.